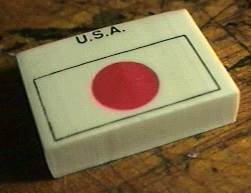 'Because the internet REALLY needs yet another anime fan site!'

Some aimless rambling about my favorite anime, including various links to other people's good anime sites...

During my misspent years at university, I became greatly interested in Anime (Japanese animation) and Manga (Japanese comics). There is such a wide range of material out there, aimed at all audiences, it is quite remarkable, far beyond the imaginings of those who know only of the inferior output of the more disreputable companies such as Manga Video (grrr...). Anyway, I have become a bit of an Otaku (though not quite in the true Japanese sense of the word, thankfully!) Here are just some of my favorite anime + manga things:

The manga Gunnm (known in the west as Battle Angel Alita) is the finest comic I have ever read! Visit the artist Yukito Kishiro's official site now! - Yukitopia (the site's in English and Japanese)

One of my favorite anime series is the completely insane and fabulous Urusei Yatsura, which you can't really find out about here on my Urusei Yatsura page, but can here at the great www.tomobiki.com!!

When I was in the 80's, I used to watch Ulysees 31, an incredible sci-fi version of the Odyssey. I've since found out the series was a French/Japanese co-production. Maybe one day I'll make a U31 site, but until then please email me with URLS of any sites you might find! It's currently on the Fox Kids cable channel here in the UK, so set those videos!
Here are some Ulysees 31 pages! :


Another fine series from the same co-production team as was Mysterious Cities of Gold! There's lot's of web stuff on this; try your favorite search engine!! Be sure to download the theme music, and feel those memories flood back!

One of the absolute masters of anime is the director Hayao Miyazaki, director of the stunning Laputa, Naussica, Tonari No Totoro ('My Neighbor Totoro'), Porco Rosso and more! Probably the best animation director in the world, ever! Di$ney are in the process of releasing his work in the west on a very underwhelmingly small and slow basis...grr... these films deserve so much better!
Good new though on the Ghibli front is that a complete retrospective organised by the Barbican is currently touring the UK... in Cardiff Jan/Feb 2002... watch those listings! There's more info at the very comprehensive Ghibli fan site nausicaa.net. Yey!

A marvellous, beautiful, surrealist anime movie masterpiece I've discovered recently is Night on the Galactic Railroad. I'll most likely create a page about it some time, but until then, visit http://www.geocities.com/Tokyo/Island/4914/index.html for images + info.

At college I was involved in the running of the Irresponsible Pictures Society. During it's epic and legendary 3 years of existance, we were devoted to showing anime, as well any as other films which we like, from Eraserhead to Star Wars (via Hong Kong). Sometimes our fellow students were not quite so devoted to actually bothering to turn up and watch them, but we had our moments of huge success, and got to watch lots of great films on a big screen. It was great!
On the left is our mascot 'IPS-Chan' AKA 'Iris'.

Below is a 'super deformed' (super deformed / SD = manga style of making ultra-cute and silly versions of manga characters and stories.) picture of me, drawn ages ago by my friend Tony! This is pretty much what I look like, except I don't really carry a huge meat cleaver around. The thing in the other hand is my cool 70's super-8 cine camera, in case you were wondering. I do sometimes really carry that around.

"Di$ney" visual pun type thing stolen off Mike Jittov. As are most things in the world.

All gibbering and actual content on these pages by Tim Drage, except where stated.

GO BACK to Cultivate Twiddle